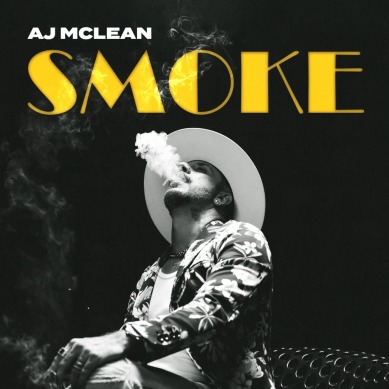 Now when I say there’s been a lot of talk about this new song, well really more the music video? I mean it. However I want to talk about the song itself first. While I enjoyed pieces of AJ’s country outing, I never hid the fact I always felt his voice was made for rnb, for funk, for soul. I mean it’s true. And I just never understood why he never went for it as strongly as he could. I mean GOOD GOD AJ, do you hear yourself on those kinds of songs?

Smoke immediately differentiates itself from everything he’s done prior. Which is a pretty solid accomplishment since if you’re hard core enough to be reading this blog you know that this man has jumped from genre to genre. His one solo album Have It All was only released in Japan**. (I still have my very expensive import CD). But this has this flair, this funk, this sexiness to it that I haven’t really seen in any of his previous efforts. He said in his latest interview with Variety (written by my favorite fangirl journalist Leena) that Prince was one of his inspirations and you can easily see it. Trust me, one of my favorites is Raspberry Beret. I can almost see the George Michael influence too, which I found interesting of course since the upcoming BSB Christmas album (don’t worry that post is next) has a Wham! cover.

Now while AJ doesn’t have any of his signature belting on the song, it doesn’t mean Smoke isn’t lit with his one of a kind personality. It absolutely does. It shows off the range and his ability to execute contorl of his vocals. Something many big belters like AJ can sometimes have trouble doing. One thing I don’t think has occurred to many, and this might be because of my musical brain, is that it reminds me of JC Chasez’ original solo effort Schitzophrenic, only an updated version. It definitely had me thinking of All Day Long (I Think About Sex) or Shake It. Only now we’re in a time where AJ will be embraced for it, unlike JC who was shunned for it.

Smoke is sexy, which considering the album is called Sex and Bodies, I’m not surprised. But the video? Well, it’s next level. The video gave me some of course some immediate thoughts. I actually liked that AJ created a video that fit the song. This song literally has sexual lyrics that aren’t exactly subtle. I’m not sure what anyone expected when it came to the video.

‘I like it when you’re confident and rub it in my face,
I’ma pop you like a pill,
I’m obsessed with the taste…”

We’re all adults now guys. Yes, there’s scantily dressed women dancing up on AJ. AJ is in his full swagger, confident as ever. And for some reason fans are suddently finding this offensive. I’m honestly confused as to why. The whole idea about inclusivity is to accept women of all types, and their choices. If these women dancing are comfortable displaying their bodies with such confidence and sexuality, why shouldn’t they?

I remember when Christina Aguilera first came out with Dirrty. She got slammed for having such a bold and provocative video. And it was stupid. Why can’t women be sexual without the slut shaming? Why can’t women be proud of their sexuality? You know who came up with the idea that is so ingrained within our society that women who do so are wrong? Men with small dick energy out of fear. Fear that they can’t control us.

In our current state of America, it’s even more depressing that this debate is even a thing. That Rochelle had to put out two tweets defending AJ and his artistic choices.

For those concerned. The girls have seen the new music video. Women’s bodies are beautiful. We teach our girls to love and respect their bodies. They also understand that expressing yourself as an artist is creative license as long as it’s in an age appropriate way. No shame

This is also a gentle reminder that not all families are the same. What maybe accepted in some households may not be accepted in yours. Let’s not judge and allow people the freedom to be who they want to be. Sending love and acceptance 🤍

(I think it’s beautiful that they showed the girls, and explained it to them by the way)

That’s the key word here, artistic. Because this is a man who also had a video featuring furries (Teenage Wildlife), and another as a family man (Boy and a Man), and yet another defying gender norms and celebrating the LGBTQ+ community (Love Song Love). People are multifaceted. AJ has definitely proved he’s got an insane amount of layers when it comes to him as a person and as an artist. Why are people judging him now?

And you can get mad, I’ll even approve the comments so we can have an open discussion. But I do think it’s hypocritical that fans who cheer at the Boys objectifying themselves for the DNA World Tour during New Love or during the changing on stage skit, suddenly have a problem now. The only difference now is the gender. Interesting, isn’t it?

If you’re for one and not then other, then yes, you’re being a hypocrite.

I said what I said.

I love that this video is sexual, it’s adult, it’s grown. I actually wouldn’t be mad if BSB did a video like this someday. Or Nick as a solo artist. If anything I’d probably be happy. Sex is a part of life. Sexuality is something that’s part of all of us. And I wish I was that confident but it doesn’t mean I don’t love seeing others who are. Now you don’t have to like the video. Everyone likes different things, but enough already with the shaming and the judgement. It’s not that serious.

Personally speaking, I think the song is fantastic and if this is a taste of what’s to come, then I really hope we see that album in October. Because I honestly can’t wait. Keep being you, AJ. For anyone curious that hasn’t heard the song, you can find Smoke on all major streaming platforms! And feel free to watch the video below.

(**It was brought to my attention that Have It All was released in all of Asia. Thank you, my mistake!)

I'm in my thirties and enjoy being a random panda. I also happen to have a semi-healthy love for the Backstreet Boys and Zombies. View all posts by Rose

This site uses Akismet to reduce spam. Learn how your comment data is processed.